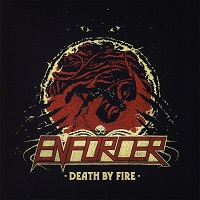 “Urgency” and “retro metal” are like two negatively charged ions. Like oil and water. Like the Cleveland Browns and consistency. You know…they don’t go together. When one slaps on a record of the retro metal variety, it’s like the band in question are just there to parade their jean jackets and affinity for Killers and Don’t Break the Oath. Guess what: A lot of people have a hard-on for those albums, too, but let’s see someone put it into motion. Who does that? Sweden’s Enforcer, that’s who.

On Death by Fire (their third overall and first for Nuclear Blast), Enforcer hit the ground running with visceral, amped-up classic metal jams that bump uglies with speed metal, but don’t sound as such. It would be like if Maiden took cues from thrash (which they sometimes did) and acted all frothy. That’s what Enforcer does here, just have a glance at the gliding “Death Rides this Night” or the fantastic twin-guitar dual rolled out on “Run For Your Life.”

Singer/guitarist Olof Wiksrand keeps it tuneful and hummable (see the Motley Crue-like “Mesmerized by Fire”), while the pace of the album doesn’t allow for a breather…nor should it. We often opine about bands trying to replicate the fervor and excitement of the 80s, and it appears that Enforcer have done their homework. You should too. This is retro metal du jour.