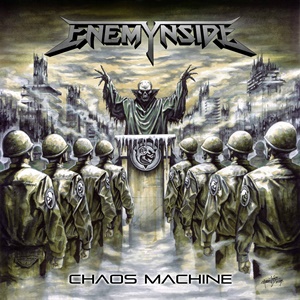 Italian thrash band Enemynside has had a lengthy career – starting in 1994 as Scapegoat, changing names in 1999 and recording three albums between 2003-2012 before taking a four-year break starting in 2013. Now active again, Chaos Machine is the quartet’s latest full-length, continuing the affinity for Bay Area thrash with a bit of that personal finesse and vigor to keep things away from mere copycat imposters. It’s evident right away that these musicians possess the requisite musicianship, creativity, and songwriting/production chops to keep listener interested pinned to whatever listening device they choose from first note to last.

The guitar riffs penetrate in a groove/thick heaviness duality that allows the rhythm section mechanics to just drive home the main hooks – check out “Suffered Defeat” as the third track for a foundational effort that causes pit movement or incessant stagediving / headbanging in unison to the musical proceedings – the extra twin axe harmonies an added icing on top. Guitarist Francesco Cremisini has a bit of a James Hetfield-like snarl to his vocal delivery, his Italian-accented voice sometimes having a difficult time knowing when to place the proper emphasis on specific words (‘tyrannical regime’ during “The Terror” a prime example) but it’s not to the point of deal breaker for overall enjoyment. Drummer Fabio Migliori is a speedy monster on his kit, his chops one-minute pocket driven and then he’ll roll ahead this sick Dave Lombardo-esque fill that leaves your jaw on the floor as “System Failure” illustrates. Gang background support props up key choruses or trailing verses, while the leads from Matteo Bellezza and Francesco elevate the technical arpeggio prowess that most thrash lovers can’t get enough of. Metallica and Testament would be the two obvious influence factors to Enemynside’s outlook on the genre – but they tend to keep their material very tidy in three to four-minute constructs, which allows the listener to absorb the eleven tracks easily and put this on repeat mode.

Social/political themes dominate the lyrical content, if you couldn’t already tell from the cover art alone. The record ends on a somber 77 second instrumental “Devoured” featuring slower clean / distorted guitar mechanics set against a seafaring / seagull soundscape – a tranquil ending to an otherwise very energetic, up-tempo thrash record. Chaos Machine is ideal for those who love riff-based songwriting with decent melodies and catchy elements in their thrash diet.