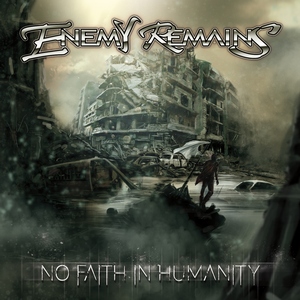 When it comes to modern metal, it’s getting to the point where it’s almost as hard to classify as progressive. Well, maybe not quite to that level yet, but it paints a broad stroke. One that can sometimes be viewed as negative by some in the scene, but if Enemy Remain’s second offering has anything to say about it, it should cause a few ears to turn to the cause.

The claim to fame for the band is having original Fates Warning drummer Steve Zimmerman behind the kit, and one can expect a diverse offering of influences over the course of No Faith in Humanity. The modern tag should give some food for thought, and feelings of thrash, groove, core, rock, and more can be heard over the 7 songs. There’s never a lack for hooks, both in the musical and lyrical sense of the word, and the shifts from heavier, groovy riffs (“Trust in No One”) to elevated choruses (“Breathe Again”) may feel familiar at times but it doesn’t impact their end result. Some strong leads on “Divided By Hate” and “No Faith in Humanity” add more spice to the mix, and give some added spotlight on the songwriting aspects – something more modern acts tend to snub. The whole package comes together in a way that the individual components create something that’s greater than the sum of the parts.

If there’s one knock to the album, it feels a bit short with two of the seven songs being key-based instrumentals. However, the rest remains a case of quality over quantity, and Enemy Remains’ sound casts a wide net – sure to ensnare a large grouping of metal fans looking for a combination of catchy hooks with true metal grit. Fans of acts such as Mutiny Within or Shattered Sun will certainly get a charge from this album.