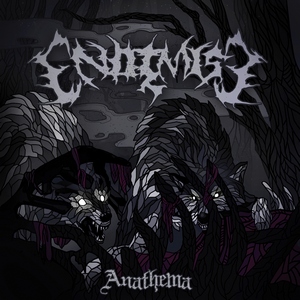 Canadian symphonic black/death group Endemise have been going for over ten years at this point. Anathema, their third full-length album in that span of time (roughly 3-4 years between each release), is a different build than you might expect from the symphonic spectrum, due to it packing a little extra spunk into the mix.

Endemise balance a more brutal, death approach with blackened and frantic tempos with some often bombastic synths. The vocal layering feels more at home with The Black Dahlia Murder if that gives a better indicator at the level of brutality Endemise is dealing out. Chunky, death metal riffs plow their way between blastbeat-ridden upticks in speed, all the while being plastered with swirling keys. If it seems like a lot to process, it can be. Ultimately, that’s the one drawback to the album. There’s just so much going on at any given moment that none of the songs really stand out from each other. With one track, you can identify different pieces for sure, but when going into the next song, you are left with the exact same feelings. Sometimes it seems there’s a fight for control of being front and center – with vocals, synth, and blasting drums all vying for your attention. Though one exception would be that of the doomier “Soma,” where mid-tempo reigns supreme for much of the song. More at this tempo could help diversify the album and strengthen its melodic end.

Considering the rush of adrenaline that Anathema pours out, it’s a nice change of pace from what much of the symphonic black/death crowd is putting out. But some added nuance from time to time would help to distinguish more of the songs from one another. There’s some solid components that come into play on Anathema, but it seems Endemise’s greatest work is yet to come.