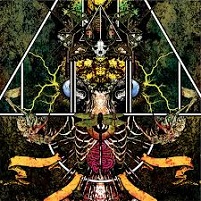 when hungry, but it’s yet to be determined if one shouldn’t write a review when famished. After perusing the bio for Encrust’s From Birth to Soil debut, it was learned that guitarist Luke Bryan is a featured chef at Chicago’s popular Kuma’s Corner burger joint. We’ve yet to frequent this supposedly fine eating establishment, but apparently, it’s good enough to be on the Food Network and and has burgers named after metal bands, which for the dorks in all of us, it’s a bonus. Distractions aside, a bag of Chex Mix was secured for this review. Phew.

A band that is barely two years old, Encrust (who until last year, were named Hunters) take affirmative action on the beefy sludge thrash sound. It all comes from the guitars, naturally, where Bryan and his cohort Ryan Kasparian move and rattle the earth with a barrage of chunky, hard-charging riffs that when prompted, can go from chugging to nimble in one fell swoop. This element alone is what gives Encrust’s its identity, and it thankfully keeps them out of the snooze-a-thon sludge/doom fray.

Hard not to get sucked in by the amplified rigor of “Engine of Deceit,” which boasts a deceptively catchy opening riff that if played without mounds of distortion, would be a classic rock jam. The masterful chugs get their due on “Grime Maiden,” and “Cult of the Cross,” where wide-open melodies meet up with singer Chris Angelucci’s hefty roar, while the retro death metal pummel of “Traitor Internal” keeps matters dirty and ugly.

Because they’re presently stationed in one of metal’s hottest hotbeds, Encrust’s future looks promising. They certainly delivered the goods on From Birth to Soil, stimulating the sludge thrash senses and tastebuds at the same time. When’s the last time we could say that about a band?