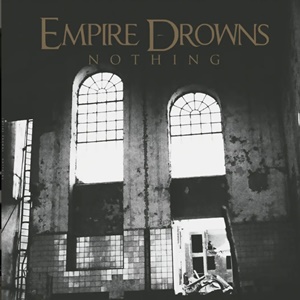 A quintet that features members/ex-members of acts like Withering Surface, Saturnus, A Sun Traverse, Meridian, and Ukraft, Empire Drowns started in 2011 and released their debut EP Bridges in 2013. Nine years later, we finally get their debut album Nothing – which again could be put into question as there’s only six tracks (two of which “I Am” and “Loved” to bookend the release in under two minutes each) that doesn’t even eclipse the twenty-minute minute timeframe. In the case of say a thrash band like Slayer, that is a full-length – but is that truly the case with a gothic, old school laden death/doom metal group?

The songwriting, atmosphere, emotions, and performances all come from the 90’s UK period when bands like Anathema, Paradise Lost, and My Dying Bride pushed those diverse sounds into an intoxicating mix that swirled into the hearts of heavy, extreme, plus gothic/ dark rock followers. The crunchy doom/gothic riffs from guitarist Thomas Birk along with the steady drum groove of Kim Jørgensen align seamlessly for the commercial-oriented “Purity” – vocally pushing those extreme parameters through the growling verses of Michael Hvolgaard Andersen along with supplemental, distant clean voicing in the final moments. “Anesthesia” mirrors its title components, the funeral keyboard spots, thunderous lead break, plus evil, plodding transitions featuring a wicked, sadistic vocal delivery make this epic 7:31 cut a central standout due to its hypnotic vibrancy. Measured thought and execution penetrate every track – the smaller details allowing the listener to dig deeper into specific aspects for stronger retention, the rhythm section work often shifting the energy levels forward as you’ll hear within another favorite in the title track. This scribe would have hoped for possible one or two more full songs, as Empire Drowns have all the tools at their disposal to develop a solid 40 to 45-minute record, especially given the almost decade-long wait between recordings.

Nothing could put these Danish musicians on a wider map of popularity, as you don’t hear many acts in 2022 reaching back to the early Peaceville period for inspiration to develop their fresh take on those impactful artists.