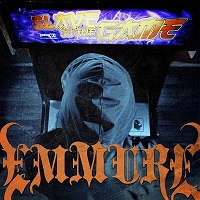 This scribe has a friend who knows someone with close ties to the hardcore scene who thinks Emmure is the heaviest band ever. No joke. Of course, hardcore kids are always a tough read since they’re affinity for a band usually is limited to how “street” they sound and the number of beatdowns they can cram into a song. It’s like they have some type of scoring system to rate a band and if they fall short in any category, they’re not worthy enough to be spun-kicked to. (For the record, this scribe has attended numerous hardcore shows…mad “props” to the bands who can do it properly.)

Since the regular metal underground wouldn’t touch Emmure with a ten-foot poll, they’ve been able to hang around the fringe of the hardcore and nu metal scene since their 2003 inception. With Slave to the Game (their fifth album), the Connecticut-based hardcore metallers have moved away from insipid and laughable song titles and subjects like “I Only Mean Half of What I Don’t Say” and “You Sunk My Battleship” into marginally mature territory like video games with “Protoman,” who was Mega Man’s temporary foil in the legendary Nintendo series.

Never mind the lyrical topics, for Emmure still lives and dies with big, boomy beatdowns. Their guitars are tuned so low that the strings feel like rubber, which of course makes it infinitely easier to chug and make up stupid riffs on the fly (see: “I Am Onslaught”). And because the band is so single-minded,Slave to the Game feels like one endless chug-a-thon, which is pretty much how their previous four albums operated.

Emmure is definitely heavy, but don’t confuse their heaviness for viability, for they’ve essentially run the hardcore/chug/beatdown template into the ground on Slave to the Game. In spite of all the railing true metallers will do against this band, they’ll still attract a hefty amount of sweaty pile-ons, sweaty hardcore dancing, and sweaty hardcore dudes in basketball shorts and hoodies. To each his own.