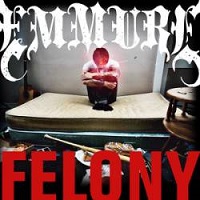 Perhaps it was inevitable that all of these garbage deathcore bands started to revisit their nu metal roots. Did anyone believe any of these bands (i.e. Suicide Silence, The Acacia Strain, et al, and the band in question, Emmure) were tried and true ‘heads? Not this scribe, so it’s a bit amusing to hear Emmure waddle through a rather unimaginative set of modern deathcore with a nu metal twist. What has the world come to?

Musically, Emmure doesn’t totally stink up the joint. The band’s chunky, blunt riffage does have powerful effect on opener “Sunday Bacon” and on moody standout “The Philosophy of Time Travel,” but then singer Frankie Palmeri opens his trap and it’s downhill. Intermixing atypical growls and screeches with talking is just…deplorable, it seems and makes songs like the ill-conceived “You Sunk My Battleship” and “I Thought You Met Telly and Turned Me Into Casper” just that: ill-conceived.

Emmure have made a career out of doing things that rub trad metallers (read: this scribe) the wrong way, so it’s not much of a surprise Felony got such a shoddy rating from yours truly. It’s all about perception, methinks, and the band is slowly making its way up the ranks for a reason. However, there’s still an outside chance their feud with the Acacia Strain (as chronicled on “R2Deepthroat”) will result in both band’s taking each other out, which would ultimately solve all of the world’s problems.