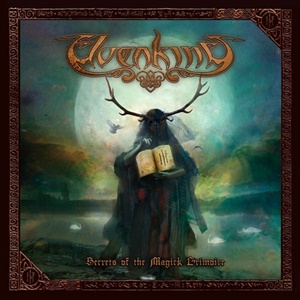 Twenty years as a band is nothing to scoff at, and Elvenking reach that milestone for their ninth studio record Secrets of the Magick Grimoire. Coming off a career encompassing double live album/DVD The Night of Nights, it would be easy for this Italian folk/power metal outfit to regroup and take their time for the follow up. But instead, embracing what exists gives renewed energy for this outfit to explore added nuances to an already addictive genre melding experience – properly producing plenty of worthwhile, catchy moments for these twelve tracks in all directions.

You don’t think of going back to more of a 90’s metal stance as being that old – but much of what is on display here will take multiple playbacks to fully absorb and ultimately stick deep into the brain and body. The larger than life, epic hymns that feature that push and pull between choir-like vocals and grandiose sonic swirls appear for “Invoking the Woodland Spirit” and “At the Court of the Wild Hunt”, as well as the violin/rhythmic folk underpinning within “The Horned Ghost and the Sorcerer” that should bring about jig action and audience swings. Guests on this record include Snowy Shaw and Witchery’s Angus Norder, giving the emotive “A Grain of Truth” (think Therion meets Queensrÿche here) and aforementioned “At the Court of the Wild Hunt” that extra edge of vocal contrast or extremity for heightened drama on the vocal front. Elvenking excel at that delicate balancing see-saw between acoustic, electric, violin, and orchestral elements to their songwriting – alleviating any sense of flat line, been there/done that aspects that could cause listeners to skip around or walk away.

The cuts that have stuck possess a bit of pushing the envelope proceedings. The Blind Guardian meets blasting nuances for “3 Ways to Magick” while the resplendent chorus evokes unison participation from Damna and the intro from violinist Lethien conjures up 70’s Kansas, and “The Voynich Manuscript” has everything from a “Creeping Death”/Metallica-like drumming element to an eerie bridge with distance, lower melodies plus a tip of the cap to blackened Scandinavian metal during the blitzkrieg final movement. Lyrically plunging into spells, dark rituals, magic books, and invocations mirrors the folk/power and throwback/cultural nature of the music, harkening back hundreds of years transposed in an aural setting for metal people to understand.

In the end, Secrets of the Magick Grimoire takes the proven Elvenking formula, mix things up with wider reaching orchestration and extreme facets, and comes up as a record very satisfying for a veteran band who refuse to stagnate.