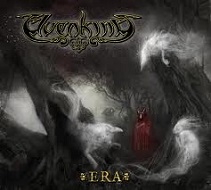 You look at a band like Italy’s Elvenking and start to think of why they’re not higher in the power metal pecking order. It’s all there, from Helloween-like joyrides, folksy bro-downs, and the necessary melodic grit that keeps everyone happy. To top it all off, singer Damnagoras has one of the best stage names in the business. Should he ever develop a serious ego problem ala Geoff Tate, he could go the “Elvenking starring Damnagoras” route, but it seems like the Italians are a tight-knit bunch.

Where 2010’s Red Silent Tides felt forced, Era gets back to what Elvenking does best, which is jolly-good melodic power metal cuts that are keen on folk, and thankfully, lag in the cheese department. The real folk comes right away on opener “The Loser,” which is a hyper kinetic number that if replaced by lutes, windpipes, and alcoholic lyrical content, would probably be a good Korpiklanni song. Former Savatage throat Jon Oliva makes an appearance on the brooding “I Am the Monster,” lending his strained, but remarkably enjoyable vocals to one of the album’s more straight-ahead numbers.

There’s no shortage of pop power metal being tossed about, whether it’s on album highlight “Midnight Skies, Winter Sighs” (love the chorus) or “Forget Me Not,” both of which benefit greatly from Damnagoras’s light-as-a-feather delivery. He’s tailor-made for these sort of songs. Elsewhere, flutes and violins strike frequently, huddling between merry melodies, fun-time choruses, and the occasional wind gust from the dual guitars of Aydan and Rafahel.

We’ll stick our neck for Elvenking primarily because they’re able to be so unilateral while maintaining their own identity. Such a balancing act is a total lost art in power metal these days; you can’t do one without the other it seems. But here is brash and bold Elvenking, rebounded nicely with Era, and doing it the necessary aplomb and zeal that should keep the momentum going.