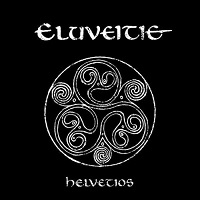 Easily the most active epic/folk metal band at the present time, Switzerland’s Eluveitie haven’t been able to match their sterling 2008 Slania, an album that while not the most elaborate body of work in this field (that distinction usually goes to Moonsorrow albums), was perhaps the most accessible, able to handle the stampede of similarly-focused bands

. OnHelvetios (the band’s fifth full-length), there are omni-present shards from the aforementioned Slania, but placed in a conceptual manner. Quite fitting…and a long time coming.

Little tinkering with the band’s core sound here, with the usual plethora of folk instrumentation (including the vaunted hurdy-gurdy) getting a workout. The back-and-forth between singer

/main dude Chrigel Glanzmann and Anna Murphy is a strong point of focus, although Glanzmann’s voice is showcased on the excellent “Home,” a song that could be earmarked as the most mournful piece the band has concocted to date. On the flipside, “A Rose for Epona” is single-worthy (hence, the accompanying video), guided by Murphy’s boisterous female pitch and poppy chorus choices.

comprise of Helvetios, meaning it’s a full-scale production that goes along the concept (of which Blistering has yet to discern). Spoken-word interludes litter the tracklisting, only to help provide some bulk to brutish numbers like “Meet the Enemy,” “Havoc,” and “The Uprising,” the latter of which clings to some of the base-ideas churned out on Slania. Other songs of worth include the spirited “The Uprising,” and melodically-savvy “Alesia.”

A bit late to the concept album party Eluveitie is, yet the singular manner of a lot of these jams would suggest the Swiss aren’t quite ready to let go of their song-first approach. That’s probably a good thing, for an overblown Eluveitie would have made a mess out of Helvetios, and in turn, would have sullied a vast portion of the band’s battle-tested ideas.