Eluveitie – Everything Remains (As It Never Was) (Nuclear Blast Records) 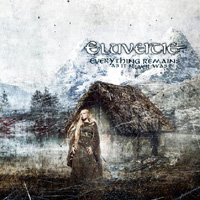 Probably figuring their window of opportunity was small, Switzerland’s Eluveitie return with their third album in three years in the form of Everything Remains As It Never Was. As the pagan/folk metal field continues to balloon, such measures (like putting an album out every year) is necessary and fortunately, Eluveitie is one of the handful of bands

playing this style that are worthy giving a flying you-know-what about.

In contrast to last year’s all-acoustic album (The Arcane Dominion),Everything… picks up where 2008’s glorious Slania left off. In fact, there’s little deviation from said album; Eluveitie has expanded ever-so slightly on their folk metal styling’s, with some minor twists to boot. Bear in mind these changes are subtle and don’t come at the expense of anything, although Everything… is not the hulking beast that Slania is.

Vast instrumentation (love that hurdy-gurdy) rules the game again, tying nicely into lead single “Thousandfold,” which is quite infectious. The blinding speed of the title track, “Nil,” and “Kingdom Come Undone” supplant the gauntlet laid down on Slania. Speedy tracks have become the band’s preferred method, even if it doesn’t suit them as well as a catchy, mid-tempo jam like “Thousandfold.”

Where the album truly succeeds is in the homespun, folks-y realm of “The Essence of Ashes,” which boasts the best chorus of the bunch, or somber “Isara.” The foreboding “Quoth the Raven” (love the interplay betweensinger/mainman Chrigel Glanzamnn and female vocalist Anna Murphy) is another standout, as is “Lugdunon,” another Murphy-led number.

In terms of sheer quality and songwriting aptitude, Elueveitie are slightly above the gallant Tyr and brazen Suidakra. These three comprise the upper crust of the current epic folk metal movement and while each has their own merit, Eluveitie is the best of the bunch. Everything Remains As It Never Was isn’t the world-beating proposition Slania was, but it’s damn near close.