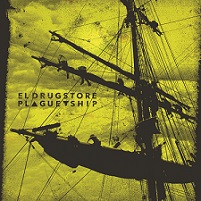 Jew Jersey’s progressive nuts in El Drugstore spent years working on their full length debut, Plague Ships. After a few listens, I’m starting to wonder if it was because they were locked away in the loony bin part of that time. What they have unleashed here is just plain crazy.

Listening to Plague Ships is like riding shotgun in a stolen hot rod with a drug crazed lunatic out for a quick joyride. Speeding off you can tell there’s a lot of muscle in this thing, but you’re getting jerked around in your seat as he’s all over the road. Sharp turns to avoid whatever hallucinations are jumping out in front of him, slamming on the brakes and then accelerating out of paranoia, fearing the cops are on his tail as if he’s in a Dukes Of Hazzard rerun. It’s all intense and fun but frightening at the same time, knowing that the whole thing could derail and flip at any moment.

It’s impossible to review this one track by track, or single out the highlights, as it feels like one cohesive piece, often hard to tell where one song ends and the next begins. Angular noodling and heavy riffs blend with jazzy bass lines and insane drumming that somehow keeps it all together without falling out of step. It’s 45 minutes of twists and turns, starts and stops, but heavy throughout.

When I think of instrumental music, I think Pelican, Mogwai, or maybe Explosions In The Sky. The kind of album I’ll turn to when I’m going to doing something and want music that won’t distract me from the task at hand. Plague Ships is NOT that kind of instrumental record. Yes, there may be no lyrics to distract you, but the sheer madness throughout is plenty distracting, and in a good way. It’s just damn near impossible to not get pulled in by the intricate soundscapes El Drugstore have created on Plague Ships. Buckle up, you’re in for an interesting ride.