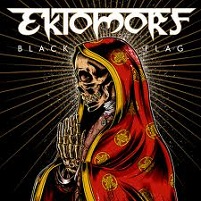 With their ideas predicated entirely on the Roadrunner Records catalog from 1992 to 1998, Hungary’s Ektomorf are able to shoot albums out at an alarming rate. They probably wake up, turn on Chaos A.D. or Burn My Eyes and write a song before breakfast. Therefore, it’s no wonder Black Flag (their ninth overall) is their second album this year, following the all-acoustic effort, The Acoustic. If the Hungarians are one thing, it’s productive. Nothing else.

Nothing different here, as Black Flag is a concoction of Soulfly, Sepultura, and Machine Head, doctored up with an excellent production job. Unlike 2009’ssurprisingly agile What Doesn’t Kill Me…, this album doesn’t have the blissfully dumb/blissfully enjoyable cuts that give Ektomorf a free pass in the plagiarism department. Sure, the thrash swivel and bounce of “Cut It Out” is strong thanks to some opening jungle riffs, but the chorus is near laughable with singer Zoltán Farkas shouting “Cut, cut it out!”

It’s next to impossible to turn a blind eye or deaf ear to the fact that while cuts like “The Cross,” “Black Flag,” and “Fuck Your God” are totally aggro and mosh-worthy, they’re simply composites of the original. It brings up the notion that being a band like Ektomorf is probably easier than it looks…never once do they have to come up with an original idea. They already have it in their CD collections.