Either Way – Behind the Light (Self-Released) 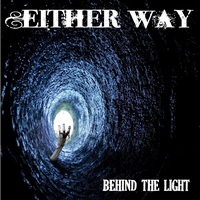 Personally speaking, if in a bit of a mood or just needing to shut down for a little while – melodic death metal has always been that comfort food. You know what you are getting: catchy melodies with just enough bite. But it has to be done right. Plenty of bands have bastardized the sound into something that is altogether too poppy (and often deserving of the criticisms tossed its way), but the sound has become timeless with plenty of room for new faces. Chalk up another well done melodeath band with Either Way.

Taking inspiration from bands like Before the Dawn and Dark Tranquillity, France’s Either Way don’t reinvent the wheel so much as polish it until it shines. All of the standard issue pre-requisites are in play, from the gruff, mid-range shouts to infectious melodies led by both guitar and keyboard, to snarling riffs that effectively hit the middle ground between heavy and memorable. It’s hard to knock the band for this approach, as songs like “Red Eyes” and “Phoenix” feature soaring melodies without having to stoop to the “clean vocal chorus” level that we’ve become all too familiar with over the years. Melodic death metal is just as elegantly done when the heavy lifting is left to the guitars. The keys get a shot at glory too, with “Evil in Me” and “Black Soul” carrying some weight that never feels overdone or taking too much away from the rest of the band.

As per the usual, one’s affection for the genre will come into play with this one, but fans of the sound are going to crack a smile when they hear Behind the Light. Not stuck too far in the Gothenburg past, yet not feeling entirely modern, Either Way have found a clever spot to position themselves in. Well-written material that continues to entice beyond the initial listens.