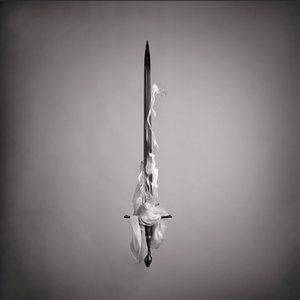 Among the many boons and pitfalls of living in this musical era of plenty is exactly that: the sheer quantity of what is available can be paralyzing. This is especially true for black metal given the penchant for one man bands across its history. It frequently means for every number of awesome albums that come out, an exponentially higher number of faceless impersonations follow in its wake. When you stumble into one of those rare treasures though, goddamn does it resonate.

Enter Self-Annihilating Consciousness. Look upon the enflamed sword that marks its cover.

Rarely has an album cover of such a particularly austere scene (that doesn’t involve a black and white photo of trees and the moon) been more encompassing of what is contained within: lethal, honed, and efficient (despite the sprawling run times, intro notwithstanding the remainders all cross eleven minutes). These are living, breathing works that continue to reveal nuances with repeat listens, with all tangible surprises.

Hailing from Washington and consisting of several veterans of the associated scene, you could be forgiven for walking into this expecting something Cascadian in nature.

While there are blastbeats and synths aplenty across Self-Annihilating Consciousness, Eigenlicht is not Wolves In The Throne Room clone #48 and as outside of sharing the aforementioned elements, bears little resemblance to their Washington cousins. For once, a non-throwaway introductory track greets us with “There Lies Already The Shadow of Annihilation”, the backdrop of guitar drone serving as a platform for solo flute (and not of the sort toted by cherubs) to provide a moment of warmth. The stage is set as it mounts to a close: this will not be the expected journey.

And cavern-like toms open up the initial minutes of ”Hagia Sophia”, a minor ritual of which the bottom eventually gives out only to give way to heavy organ and a guitar that is…bright, bright in that it feels celestial. A funerary dirge, a march toward wisdom, unwanted inevitability, or perhaps both, moves us forward as the band seethes in restraint behind the blackened veil it conjures. The march slows to its slowest and the fires of wisdom through suffering are found – an ascension in form as the band takes on the fires and the song rockets to its conclusion. Words fail to adequately do it justice. It’s an experience, and it’s only the first.

This progression isn’t unique to “Hagia Sophia”, it follows in new forms on “Labrys”, “Deifugal Force”, and “Berserker”, each in kind given to particular peaks and valleys, the reflective and the harrowing alike. There is a magic to Self-Annihilating Consciousness and a lot of it stems from integration of synth in the mix: it’s everywhere. It’s is at times at the fore (“Deifugal Force” in a stirring Stronghold-era Summoning send up before the guitars come in to level), at others it’s framing the cacophonous terror running through it, at others still it is tangible only in that it’s likely filling the role of bass, often with unnerving results.

I became introduced to Self-Annihilating Consciousness earlier in the year thanks to I, Voidhanger’s ongoing Bandcamp domination (indeed, it was due to association with Panegyrist’s Hierurgy, one of my favorite releases this year) and find myself surprised here that it has flown under the proverbial radar. It’s a large, dense album though I’m not sure I would say it’s inaccessible. The release is shared with Gilead media, and perhaps unsurprisingly there is very much a shared DNA in the melodic guitar theatrics with the likes of Krallice.