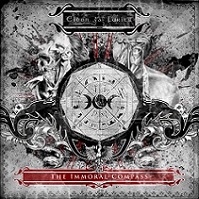 Eibon La Furies’ The Immoral Compass is nonsensical and avant-garde. That, we know. It’s not any good either, which is a bummer since most of what Code666 releases can properly toe the line between being digestible on an extreme platform, while introducing outside elements. Self-dubbed as “a fusion of avant-garde black metal, dark rock, and occult spiritual ascendance,” the band is in severe need of someone standing over their shoulder to tell them they’ve gotten out of hand. The Immoral Compass is out of hand, but not like the Entombed song was. That song rocks.

For all the colors and shapes hauled out of the toy box, as well as the constant tempo and focus shifts, Eibon La Furies doesn’t seem to know what they’re doing. When they start to do a black metal peddle, in comes the dark rock, which is more like syrupy Goth rock to these ears. And when they settle into an atmospheric drift, the lack of persuasion and dynamics is troubling; it’s all just so piecemeal and sloppy. The album practically dares one to find something of value, which DR tried, only to come out of the (cold) lake with spare nuggets from “Imperial Jackal’s Head” and “Ascending Through Darkness” as being the only moments of resonance.

All intrigue and no substance, The Immoral Compass has no median or identifier, which means Eibon La Furies probably have one too many hands in the ‘ole creative cookie jar. An important reminder: Just because it’s an idea, doesn’t mean it’s good. And good ideas here are few and far between.