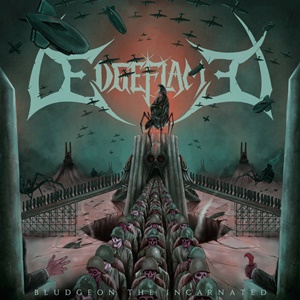 Formed in 2010, Turkish act Edgeflame have been hustling away in the underground – releasing a demo and three full-lengths prior to this fourth album Bludgeon the Incarnated. Only rhythm guitarist/ vocalist Tolga Sert remains from those early days – the latest member in the quartet lead guitarist Ege Baydar joining in 2018. Now that you’ve been brought up to speed from a historical perspective, lets look at these seven tracks and see where the band stands.

Thrash is the name of the game here – the semi-technical type where solid musicianship and mechanics come into play against shifting tempos and militant vocals. It’s evident that Edgeflame love the maneuvers of Megadeth but also the aggression of Sepultura and Sodom when you hear the jackhammer rhythms and thunderous fills/double kick activities throughout the title track – Ege adding in some sophisticated shred/tapping maneuvers during the lead break while the mid-tempo transitional shift will probably cause human mayhem in the pit. Death angles come in with some stunted riffing and semi-blast beats for “Sacrilegious Inferior”, the drums and guitars coming together as one assaulting the senses as the band just knows when to push the pedal to the metal and lay off for some melodic reprieve before the next wave of aggression kicks in. The fact that Edgeflame willingly add those extreme tremolo aspects and speedier/underground nuances establishes the band as being a bit different than the retro-Bay Area style acts, and that’s a good thing – because songs like “Alpha Steel Revival” and “Providence at Dawn” provide plenty of punch, power, and solid intricacies to cause manic headbanging and devil horns salutes through successive airings.

At less than 27 minutes, Bludgeon the Incarnated is a swift and short outing that keeps Edgeflame focused and sharp in their semi-technical thrash ways. There are plenty of people who love the primitive aspects of the genre – and if you find yourself in that camp, this record is in your wheelhouse.