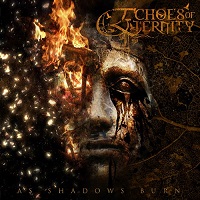 California’s Echoes of Eternity play a ferocious brand of progressive power metal, separating themselves from the pack with the expansive vocal range from Francine Boucher and the twisted time changes that will go from Iced Earth triplet riff picking into a blast beat rhythmic fest in the next measure. “Blood and Gold” opens with Boucher’s atmospheric, breathy and slightly gothic register while guitarists Brandon Patton and Bryan Eagle lay down some serious jack hammer precision with their harmonies and thick parts.

guitarist Logan Mader gives As Shadows Burn a modern, crushing production – you will not mistake anything about this as being less than 100 % metal. Echoes of Eternity prove their approach often parallels the best extreme artists as they temper pushing the boundaries of what’s expected in their style while crafting dynamically moving songs.

exchanges while the vocals appear to take you on a Middle Eastern journey as well as “Ten of Swords” that brought my cranium back toDigital Dictator-era Vicious Rumors along with the infamous ‘always darkest before the dawn’ lyric that ends its chorus.

In comparison to their The Forgotten Goddess debut, As Shadows Burn shows the group maturing and broadening their sound, going for more of a dark power style that continues where Iced Earth left in the late 90’s and possibly bringing Steel Prophet up in your memory banks. Enjoy the risk-taking – it’s refreshing and hopefully the exploration continues on future records.