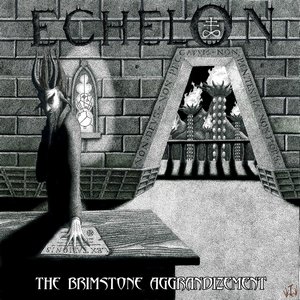 The old saying goes, if it isn’t broken, don’t fix it. That’s precisely the mindset of international death metal supergroup Echelon, whose members include Dave Ingram (Bolt Thrower, Hail of Bullets, etc) and Rogga Johansson (Paganizer et al) alongside a few other Paganizer/Ribspreader/Akatharta members. Based on the members involved, it becomes pretty clear quite quick what type of material Echelon is going to be cranking out.

Classic death metal through and through cuts through the speakers as The Brimstone Aggrandizement plays. Obviously there’s a pedigree involved with the level of members within the band, and they manage to stick the expectations. There’s always the argument of “having heard all of this before,” but what matters most here is that it’s a fun death metal throwback. It never leans too far into one direction (a la the Swedish stuff) and balances the aggression with plenty of thick grooves for the listener to latch onto. For every blistering cut like the title track, there’s a more mid-tempo romper like “Vital Existence.” The riffs are energized and do a good job of keeping things moving forward and providing engagement, despite the familiar setting. Ingram’s vocals are also a treat, providing that same level of intensity that those would expect from him after all these years.

No point in dragging out a lengthy review on an album like this one. Bottom line is pretty cut and dry: if you enjoy old school death metal, The Brimstone Aggrandizement is going to provide you with plenty of entertainment. It’s got all of the fixings one could hope for. If you don’t, this isn’t going to be the album that changes your mind.