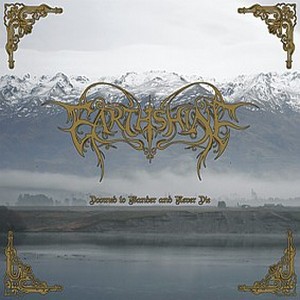 Doom metal is a curious genre. While it seems to have started almost with the origins of metal itself (Black Sabbath) it has grown over the years and expanded as any good off sub genre should. Earthshine have taken the doom foot print and integrated heavy doses of deep death growls (with some Carl McCoy style sung sections) and melancholic, depressive riffing backed by atmospheric synth work. Earthshine have the necessary tools to really hit a home run with the style they are playing, but Doomed to Wander and Never Die never really pulled me into its full foggy gloom.

Upon looking for information it appears DTWAND was recorded last year, but was remastered and re-released by Northern Silence Productions for this year. Earthshine’s doom liturgy is a melodic dirge style with cavernous growls and interesting clean vocals that, as mentioned above reminisce of Carl McCoy tones in places, a positive thing indeed! Behind the scenes swaths of synth organ tones back the power chord doom bringing, as “Envoy of the Dead” show cases. Earthshine do enough to kindle a fire of interest but I felt like there wasn’t enough substance through out DTWAND to keep me interested.

The tracks seem to carry on a bit and there aren’t many parts that break the funeral dirges. I was left wanting more lead melodies to bolster the riffs, which are fine, but nothing above the usual doom power chord fare. When Earthshine do use synths/accenting guitars like on “Call of Another Universe” it works very well, giving this track a depth and soul that showcases the creativity Earthshine has under the surface. All in all, it’s not a bad first release if you’re looking to scratch an itch for melodic death doom. I’ll be waiting to see how Earthshine temper their hand of doom for the next one.