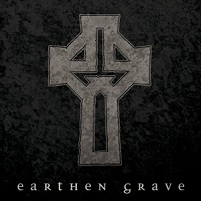 Seeing a bunch of doom vets put together something more than a run-of-the-mill Sabbath affair can warm one’s heart. Going said route would be too easy, for apparently, everyone and their mother thinks that doom begins and ends with the Birmingham boys…but it doesn’t. Chicago’s Earthen Grave are a doom collective comprised of past and present members of such luminaries The Living Fields, Debris Inc., and Trouble, so appropriately enough, there’s plenty of classy, homegrown doom wheeling-and-dealing that makes this self-titled debut more charming than meets the eye. And yes, there’s some Sabbath being tossed about.

The wild card in Earthen Grave’s rich and tonal sound is classical violinist Rachel Barton Pine, who is given free rein to flutter over most of the album’s ten songs. All this does is create a My Dying Bride-like aesthetic, one that may not be as oppressive, but is certainly captivating, as heard on cuts like “Life Carries On,” “Blood Drunk,” and “Dismal Times.” And it’s not like these songs don’t have any muster in the guitar department, with the aforementioned “Life Carries On” and the awesomely-titled “Beneath A Shovel Load” packing on some barreling riffs.

Singer Mark Weiner (Trifog) is one heck of a find, for the man’s classic metal delivery (minus the highs) is quite the offset to the band’s plodding and dark tactics. Weiner casts a pretty wide net on the excellent “Burning A Sinner” (do we hear Kansas?) and “Death On the High Seas,” where his pitch-perfect yelp wraps its tentacles around a 10-minute epic that closes the album out on a high note.

Given the all-around professionalism of the parties involved, Blistering could see Earthen Grave having a While Heaven Wept-like trajectory. There’s some minor parallels between the two acts, and while Earthen Grave may not yet have the flair for the dramatic, the songs are certainly there. Definitely one of the year’s best doom newcomers.