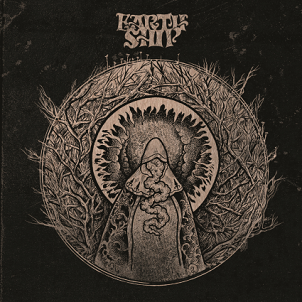 It has been slow, but the affinity charge for the ‘90s appears to be a full go. Clearly, it’s an every-other-decade thing; the ‘80s were all the rage last decade (and still are, to some extent), so it’s not much of a surprise to hear bands rekindling sounds that took place approximately 20 years ago. In the case of Belgian grungy sludgers Earth Ship, their habitual wading into the muddy/troubled/cloudy waters of Seattle grunge and Crowbar-esque tar metal breeds fuzzy memories of tattered flannel, swamp licks, and moaning vocals on Hollowed.

Mainly just all thick, almost molasses-y songs here, none of which are in much of a rush to move the tempo needle. The riffs, of course, are forceful, but hardly mobile, just a spread of blown-up (or blown-out) guitar motifs that grind on as the album wears on. The crush on opener “Reduced to Ash” is suitable to start proceedings, where Earth Ship starts to inter-mingle tough guy growls and rainy day croons, of which on some level, are to resemble that of Layne Staley of Alice in Chains fame. (Note: It’s near-impossible to replicate Staley.) So it boils down to the more underwater and churning numbers (“Monolith” and “In Fire’s Light”) to get Hollowed a-moving, complete with behind-the-beat drums and the aforementioned vocal interplay.

Hollowed is simply one straight line, practically stiff release. Without much of a wow-factor moment, you’re sort of left to root around in a basket of oft-used riffs from another era, simply set to the tune of production techniques circa today. It begs the question: should the flannel shirt just be left in the hamper in perpetuity?