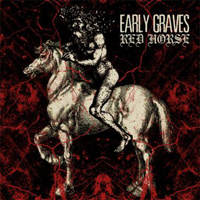 Unfortunate circumstances surround the release of Red Horse, the third outing from San Francisco’s Early Graves. Original frontman Mahk Daniels was killed in a van accident while the band was on tour in 2010, creating a gaping hole in the band’s lineup. Obviously, no one would have balked if the band decided to pack it in, but as a tribute to Daniels and means of going forward, the Bay Area boys have enlisted vocalist John Strachan (Funeral Pyre) and subsequently kept the ball rolling.

A blend of crusty punk and thrash (“crust thrash” perhaps?), Early Graves benefit both from their need for speed, and the grainy production job the album possesses. Since Red Horse doesn’t have the treble, volume-heavy sound of its contemporaries, it’s a throwback to mid-80’s crossover, where energy and attitude were chosen over precision and technicality. Therefore, the raw nature of the album’s running order recalls the brash temperament of vintage Black Flag, coupled with the mondo-aggro approach of current crust-fiends Tragedy and Trap Them.

Strachan does an admirable job of filling in, even if he’s of the non-sequitor vocalist variety. It’s no fault of his own, for the overblown angry-dude-on-vocals perch has become practically null over the calendar year, probably because all of these dudes sound the same. Regardless, there’s no time and energy wasted on frenetic doses such as the opening “Skinwalker” and the title track, both of which should get some crowds whipped up into a frenzy. It’s not until the closing track, “Quietus,” in which Early Graves make their mark, wrapping up the album in instrumental fashion, complete with forlorn and melodic guitar lines, perhaps as a tribute to their fallen frontman.

A valiant return for a band that had every reason to cease operations, Red Horse retains the force and vigor Early Graves trotted out on 2010’s Goner. And while this might not help them climb the crust metal ladder, it’s emblematic of the band’s unshakable will, which in this day and age, counts for something.