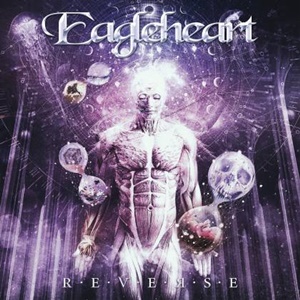 Considering Eagleheart conjures up the Stratovarius song that opens Elements Part 1, it shouldn’t really cause cardiac arrest that this Czech Republic quintet live for that European power metal uplifting bombast. Starting in 2003 and going through normal lineup growing pains, they’ve released an EP and two albums previous to the one under inspection Reverse. Six years after their last Dreamtherapy effort and once again securing renowned Masterplan guitarist Roland Grapow as a producer, they execute energetic songs full of soaring vocals, indelible melodies, and those musical harmony passages that stir the crevices of warrior souls.

The foundation of any premiere act of this genre starts with dual axe play that is crisp, sharp and able to handle everything from spider web unison licks to straight forward speed or mid-tempo anthem action. Michal Kůs and Michal Jankuliak supply all those tools and more, up to the challenge for arpeggio shred action as well as supplying clean and serene harmonies on “Erased from Existence”, while keeping things relatively traditional on the more comfortably commercial-paced “Endless”. When you need those heart-racing, high BPM numbers, drummer Filip Smetana has no trouble supplying the double kick and thunderous fill/transition work for “Palace of Thoughts” and the more aggressive, semi-staccato driven “Mind to Decipher”. Wisely these musicians also place more atmospheric moments in terms of added historical speech footage or swirling keyboards that heightens the mood when Eagleheart push their melodic tendencies and rhythmic pulsations – even deep into the second half of the album as “Enemy Within” has all the requisite vocal/musical hooks for Helloween/Edguy sing-a-long moments.

Vocally Roman Sácek has a magnificent range – very capable of hitting those falsetto highs without overstaying his welcome, while also being very gritty in lower registers. His choice of phrasing and lung capacity reigns right away on “Until Fear Is Gone” – giving off a combination of Michele Luppi during his Vision Divine days as well as Timo Kotipelto, while the previously mentioned “Erased from Existence” showcases his restrained comfort and ease of climbing and descending registers as the best power metal singers need to be successful. It’s clear Eagleheart know their craft, painting their ideas with enough versatility as to touch on all facets of the power metal genre – making Reverse another mandatory effort for those who love European-flavored melodies and memorable musical hooks/riffs.