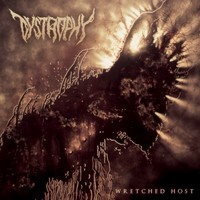 You know that you aren’t going to be hearing the usual death metal album when it opens (and later closes) with some mournful violin. Alas, Dystrophy makes a name for themselves early on in their second album, Wretched Host, for utilizing an idea without making it seem gimmicky or needless. Turns out it’s only the tip of the iceberg, as the band continues to defy expectations as you listen to the entire album.

Even though Dystrophy falls into the skronky (apparently that’s now the term we are giving bands that have the dissonant sound like Gorguts, Ulcerate, or Pyrrhon) technical death metal category, there’s more to it than that. There is plenty of dissonance that can be felt in each track, but the best part is the melodies. Some bands in this genre tend to just use their dissonant riffing to make a distinguishing mark, but Dystrophy fires off actual, bordering on catchy atmospheric melodies and even couples this with burly, Suffocation-esque riffs. Most impressive is that you can hear all of this in one track. “Singularity” opens with some fast, NYDM-styled riffing with some sense of groove before the band takes the song into some eerie melodies and later dissonance. The previously aluded-to opener and closer (“Apex” and “Nadir” respectively) portray a masterful sense of melancholy, in addition to their inclusion of guest Ben Karas’ (Windfaerer) violin. The melodic solo of “Nadir” is a definite album highlight. Meanwhile, the title track will give you the crushing energy that only death metal can provide – giving listeners a diverse listen that is bound to draw them back.

Usually bands of this style have a waiting period that requires a thorough listen before one “gets it,” yet the combination of influences in Wretched Host give it an immediate accessibility without compromising the complexity or heaviness that is needed to be successful. It’s an intoxicating mix that effectively takes the best elements of the noted influences and brings them together into something more. Expect Wretched Host to turn some heads as word gets around about these guys. Dystrophy should be on your ‘get to know’ list.