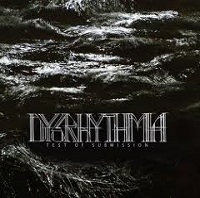 Colin Marston is an inhumanly prolific guy. Playing in and releasing albums with several different bands on a yearly or semi-yearly basis and keeping a full time

studio job, it makes one wonder where all t he time an energy comes from. That haircut must be magic. Based on how good Krallice’s newest album was and the looming threat of a new release (at last) from Behold…The Arctopus, it’s all the more surprising that Dysrhythmia’s newest monster Test of Submission is so good. Tightly wound around atmospheric nuances and constantly shifting technical tones, it’s all the while an easily digestible affair.

The contrast of throbbing technical forays and soaring incisions of melody dominate the whole affair. “Running Toward the End” is the best example of this balance and arguably the best song here, being just tight enough to feel as though a fleeting breath despite its near 6 minute run time. Closer “In Consequence” sees both ends of the spectrum the band straddles stretched and blown up to the extreme and seethes with a peculiar darkness instrumental bands rarely pick up on. To the opposite of that lies the phenomenal “The Madness of Threes”, its fusion-esque spiraling and melodic richness causing it to feel multiple times bigger than its scant four-minute run time allows!

Overall at 45 minutes, the album is refreshingly brisk in its pace and how quickly it sinks in. Jazzy underpinnings ring out more on this album than any of their previous releases and Test of Submission is all the better for it. Though not quite intended for the same audience that Red Sparowes plays to, this is the tightest and most atmospherically solid instrumental release I’ve had the pleasure to encounter since The Fear Is Excruciating But Therein Lies The Answer. “The Line Always Snaps” pulls so many of the disparate threads together and careens with reckless abandon through the cosmos of the mind and heart, indicative of the album as a whole and every reason why it should be a foremost indulgence.