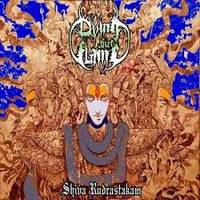 Xtreem Music is doing a bang-up job of grabbing excellent international metal bands from interesting locations. We recently witnessed the awesome power of Iran’s Azooma, and are now given Nepal’s Dying Out Flame. Taking relentless death metal a la Hate Eternal or Krisiun and blending in traditional Hindu instruments and chants gives them their own pedestal to stand upon. While there is certainly more to the picture, an easy tag would be to label Dying Out Flame as doing for Hindi music what Nile did with their Egyptian theme.

While on paper it might not seem to work, Shiva Rudrastakam is a punishing blend of death metal. The opening song, “Praise of the Omnipresent One” sets the tone for the inclusion of more traditional Hindu influences, only to have the title track erupt with straight ahead death metal violence. Burly riffs with an eastern flair offer no compromise and nicely incorporate a mellow moment amid the chaos. “Eternal Mother of Great Time” slows the pacing down and has some cool female vocals/chants towards the end of the track. The blastbeat-ridden centerpiece “Vayuputra” takes all of these moments from the first few tracks and combines them into a true showstopper. The remainder of the disc follows suit with equally menacing yet esoteric appeal, never allowing the explosive death metal to become stagnant.

It’s clear upon first listen that Dying Out Flame are not using their Vedic death metal as a gimmick. For their first attempt, it is almost breathtaking how well the Hindu instrumentation and chanting fits with pulsating and intense death metal. It’s nice to see newer bands like this putting in the extra effort to give themselves a more unique sound in the crowded world of death metal. This is a band with a very bright future.