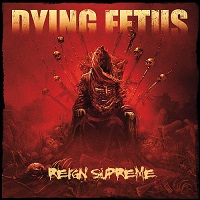 The Gallagher/Beasley/Williams formation has not only been Dying Fetus’s longest lasting incarnation, it is perhaps their most productive. The time the band spent shaking off the cobwebs after the dissolution of the Destroy the Opposition lineup has served them well, for Reign Supreme is focused and hits all targets, much like a lot of their early material and 2009’s Descend Into Depravity did. In fact, the trio make things sound so convincing, that you’ll want to get your limbs loose to throw down with the deathcore mosh and spin-kick merchants.

Unlike a lot of their peers who can’t decide whether to be technical or simple, DF blends both rather seamlessly. Naturally, the mosh-ready riffs are going to get the most fanfare, as jams like “Subjected To A Beating,” “In the Trenches” and “Devout Atrocity” each have their coiffeurs spilling with John Gallagher’s meaty, mid-90’s riff. The man can sure riff these suckers out and since he was doing it way before the current deathcore brigade, he gets a free pass for even some of the more silly and boneheaded chunk riffs.

The technical bits shine the brightest over the course of the album’s nine songs. Opener “Invert the Idols” is relentless slab of might and groove, while Gallagher heads into Cannibal Corpse territory on album highlight “Second Skin.” At 37 minutes and change, Dying Fetus don’t have to do a whole lot of messing around, eventually winding things down on album closer “The Blood of Power,” a triumphant slab of primal death metal, done with modern ‘core attitude.

While people are only realizing just now how influential Dying Fetus are, it’s prudent to note that Reign Supreme is less for the advancement of the band’s sound than it is a reminder of who does true-blue deathcore the best. It’s not their fault a bunch of young and clueless hi-jacked their sound and popularized it, yet it’s all the more reason to come out with an album with even more bruising numbers than ever before. Reign Supreme couldn’t be a more fitting title.