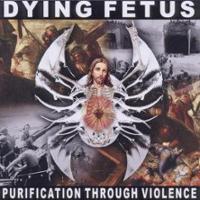 Now that their back catalog is getting the much-needed reissue treatment from Relapse, it’s more apparent than ever where the kiddie death metal pool has been swiping their ideas from – Dying Fetus. Originally released in 1996, Purification Through Violence is an album infinitely ahead of its time, bearing a lot of the hallmarks that are so prevalent in modern deathcore. They should sue. That will show ‘em!

Founding member/guitarist John Gallagher’s deep and grizzly guitar tone is what makes DF go, especially during the topsy-turvy portions of “Skull Fucked” (note: 90’s death metal had the best titles). Never one to shy away from a killer groove portion, Gallagher’s riffs would have fit just as easily into a Pantera-styled band as it would for Dying Fetus, and when he lets things fly and proceeds to the drop the hammer (“beatdown” wasn’t a part of anyone’s vernacular back then), it’s undeniably heavily.

Paired with bassist Jason Netherton (now in Misery Index) on vocals, the duo constantly hound each track with a feral tenacity that is best exemplified on “Raped On the Altar” (pre-song soundbite included). The two aren’t all that distinguishable (Gallagher handles most of the lows), but again, it was an idea that no one was willing to explore back then.

As far as death metal debut’s go, Purification Through Violence landed right smack-dab in a time when DM was on its way out, and black metal was about to start its short-lived reign. The fact that Dying Fetus was able to hang around in an era dominated by Cannibal Corpse and Morbid Angel rip-offs is a testament to their forward-thinking approach to death metal. It still exists within the band today, and is heard every time a bunch of teenagers posing as “death metal” drop a beatdown.