Dyecrest – Are You Not Entertained? (Inverse Records) 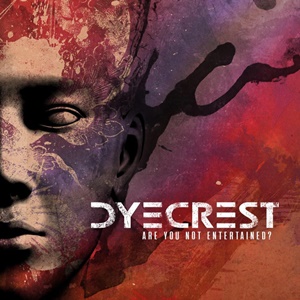 With a history that for three of the members goes back to 1993, Finnish act Dyecrest possess that requisite seasoning and experience to make their mark even after a prolonged break. Competing in 2003 for Young Metal Gods, they placed second to gain a record deal with Noise/Sanctuary, releasing two albums in the process with The Way of Pain (2004) and This Is My World (2005) – touring with W.A.S.P. and Dragonforce as well. However, internal strife and lingering label support led the band to go on hiatus from 2008-2011, officially reforming in 2013. Even up to the final recordings for this third album, the vocal position was in a state of flux – securing Mikael Salo at the eleventh hour to re-record most of the vocals outside of a couple of guest situations (more on that later). Now that everyone is up to speed, let’s delve into the contents of Are You Not Entertained? – eleven full songs plus a couple of short instrumental pieces that sit in a melodic heavy/semi-power metal stance very familiar to European followers.

The diversity of the music becomes one of the strengths as you go through the record – “Red Alert” is a duet between Mikael and Soilwork’s Björn Strid, a song featuring riffs that traverse US modern/alternative metal (think System of a Down), just twisting it up through super catchy melodies, while “For the Better (They Will Die)” contains numerous catchy twin guitar refrains against a stunning mid-tempo template in line with possibly Sentenced meets Pretty Maids. Drummer Niko Takala drives the rhythm section through a steady supply of in the pocket tempos while accenting the energy in double kick/fill spots – as “The Stage Is Set” and “Devil Dance” are two standout examples of what he brings to the table. The sextet weave in keyboards without sacrificing the electric guitar foundation – serving up more color and atmosphere for “Fading/Reaching”, while being the centerpiece of the sparse ballad “Nuku Vaan” featuring singer Elisa de Boer. Employing choir vocal assistance from Piet Sielck and Jan Eckert of Iron Savior throughout also bolsters the choruses and melodies, all the way through the 6:25 “Winterblood” that showcases a dramatic delivery from Mikael, theatrical-oriented transitions and killer lead break moments to keep the aural excitement from beginning to end.

Considering this is a mixture of material that’s been worked on for quite some time, Are You Not Entertained? has that special charm that a comeback needs, and hopefully can be the proper rebirth and return that both long-time followers want and attract new people to the fold. Dyecrest approach the genre from a song-first perspective, making this ideal for people into Pretty Maids and Evergrey, as well as older 80’s/early 90’s European melodic metal styles.