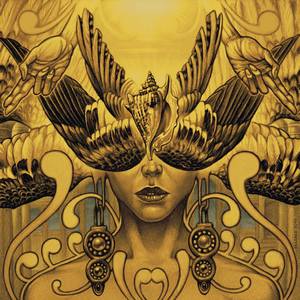 Heavy, thick slabs of sludge have always had a cinematic scope to them, if in the proper hands. Bands like Eyes of Fire or Mindrot have weaved webs of crushingly heavy riffs with more gentle atmosphere and given it a larger than life feel. Dvne channels some of that same essence with their second release, Etemen Aenka, and ups the cinematic feel by designing massive contrasts and an intriguing sci-fi concept story to tie it all together.

As a conceptual album, Etemen Aenka does require a bit of effort on behalf of the listener to get maximum enjoyment from it. This isn’t the type of material that you just toss a single song on and call it good. While the songs can carry themselves in that manner, this is a release meant to be heard in a single front-to-back listen. While 67-minutes is a bit of an investment, Dvne will make it worth your while. Their strong suit is providing an experience that brings the listener into mammoth sized riffs and knocking you backwards, and then giving you a bit of gentle atmosphere to get back on your feet again before being crushed by the next round of heaviness. Of course, there’s some melodies that wrap themselves into both sides of this coin, and further the intrigue – such as on “Omega Severer,” where sludgy riffs share space with some melodies that border on post-metal in their beauty, further weaving themselves into quieter moments to give you the feeling of being pulled into another world. There’s a genuine sense of urgency with the lumbering grooves and riffs, and it does aid with the dynamics at play (see “Si-XIV”), to really catch your ear.

Dvne does an excellent job of creating an escape for the listener with Etemen Aenka. The combination of story and music does its best to draw you into a dynamic world full of surreal heaviness and elegant melodies, done in such a way that you can sit back and just enjoy the soundscapes from start to finish. Perfect for those seeking a musical adventure.