Duskmourn – Of Shadow and Flame (Self-Released) 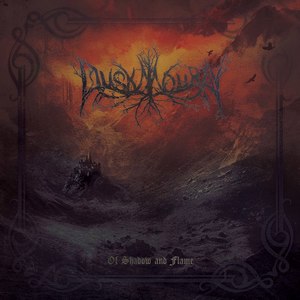 How do you top a self-released album that was praised across the board? Take the momentum and get right back into business of course. Duskmourn’s first album, 2014’s Legends, introduced the blackened folk metal act, and they’ve taken the necessary steps to ensure that their name continues to grow with their second effort.

While Of Shadow and Flame is definitely more rooted in black and folk metal, it’s hard to escape the Gothenburg-esque vibes that the album turns out. An emphasis on sweeping melodies harkens back to the glory days of the genre – rich and memorable riffs that tend to stick into your head as soon as the first listen is over. It’s an oversimplification for sure, but think Drudkh/Moonsorrow meets Amon Amarth. There’s that older feel in the production as well – not a dig by any means, because it feels completely natural and right with the feelings of the music and everything is a clear as it should be. There are keys used as well, and they are done tastefully, and in a way that adds the right amount of atmosphere without becoming the dominant force of the album. Instead we are given epic sounding, folk-inspired (some great acoustic passages and chants to be found) material that’s received a boost of grandeur. Final track, “The Last Voyage” really brings in everything the band does well into a near 15-minute journey that, in and of itself, has more standout moments than some bands can muster on an entire release. It takes effort to make longer songs sustain themselves, and Duskmourn really pull out all the stops here.

Of Shadow and Flame solidifies Duskmourn as a force to be reckoned with. If you fancy some epic and glorious melodies that will cause involuntary raising of the fist, this one should definitely be on your wishlist.