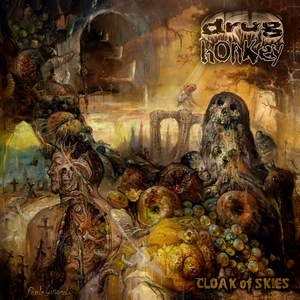 Long-time purveyors of the strange, psychedelic, and just plain weird, Drug Honkey aren’t exactly on the radar of many due to their eccentricity. While many clamor for something original or inventive, it’s often the ones who take initiative along with them that end up being neglected for that very reason. The crux of trying to make an original sound amid a sea of copycats doesn’t always work on in one’s favor unfortunately.

Cloak of Skies is not a comforting or easy listen. The way that the sludge/doom is countered by industrial and noise influences makes for a jarring and oppressive vibe. But that’s also what gives it strength. Over the course of four previous full-lengths, Drug Honkey has enhanced their formula and Cloak benefits from eerie, Godflesh-esque twists that provide a framework for descent into sludgy madness. There’s the pulsating heaviness that jackhammers away on “Outlet of Hatred,” psychedelic and creepy horror vibes on the title track, and trippy industrial beats of “Sickening Wastoid.” It almost sounds like the soundtrack to an underground, noir-type film with its tone and grim setting. In getting back to the opening line of this paragraph – it’s not an easy listen. The challenge and initial intrigue of hearing the different elements merge together doesn’t seem to last with repeat listens, making it an album that’s better enjoyed on an infrequent basis to keep it special.

Sometimes horrifying and other times destructively bleak, Drug Honkey have designed a unique vision of sludge and doom metal. It may not be the type of thing that you can bust out every single day, but it makes some powerful use of industrial effects in a way that most bands couldn’t even dream of concocting. Nightmarish indeed.