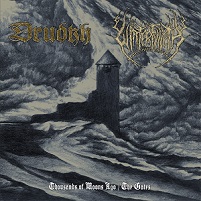 For fans of top-notch pagan black metal, a Drudkh / Winterfylleth split EP sounds great.  For vinyl collectors of the same ilk, this split EP, released as a 12” hand-numbered, limited pressing (666 copies!) on colored vinyl is a god damned wet dream.  Even if the songs weren’t great (they are) this would be a special release.  Given how cool this is, and how good this is, it’s a mandatory pick up for a collector of either band.

Thousands of Moons Ago /The Gates is a four-song EP of cover tunes by these two venerable bands.  The theme of the release is one of homage to their influences, and has three from Drudkh and one from Winterfylleth.  Drudkh covers songs from Hefeystos, Unclean, and Sacrilegium – Winterfylleth covering a Hate Forest tune (“The Gates”).  Of course, the fact that Drudkh and Hate Forest share so much in common (mainman Roman Saenko and vocalist Roman Blagih, to start) it sort of comes full circle to hear Winterfylleth covering Hate Forest, and it sounds great.

Granted that these are cover songs, so not technically “new”, we find Drudkh sounding positively vital, pulling out all the stops with an array of fury, atmosphere, melody and intrigue.  Where on 2012’s Eternal Turn of the Wheel things came across as a bit safe or, daresay, dull, here is a glorious burst of the freshest sounding stuff Drudkh’s put out in a bit, and it’s highly satisfying.  Rich in musical texture and dynamic, Drudkh are in fine form, and their distinct brand of black metal is invigorated by the cover treatment.

Winterfylleth sound coldly fierce in their own poignant black metal paganism, cranking out the nine minute “The Gates” to conclude the EP.   Chock full of their thick sound, brimming with darkly melodic guitar rhythms under double kick-drum bombardment, as well as more airy sections of spaciousness, Winterfylleth do their thing, and there’s no mistaking who is doing the playing on this one.  Clocking in at about 25 minutes, Thousands of Moons Ago / The Gates is certainly recommended for both fans and collectors.