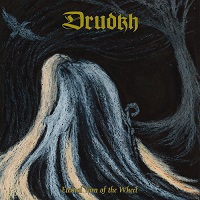 By standard of convention, Drudkh’s 2010 opus Handful of Stars was anything but conventional. It laid off the distortion yet was still heavy, it was black metal sounding but didn’t beg and borrow from Burzum, and was ethereal without using over-used atmospheric elements. In essence, Handful of Starswas the perfect album at the perfect time for Drudkh, who after years of Vikernes-aping, had finally seemed to turn the corner. Alas, with Eternal Turn of the Wheel, the band has taken a step back, albeit a minor one.

Still quite adept at conjuring up a mesmeric haze, Drudkh is able to find its stride early on “Breath of Cold Black Soil,” a number that utilizes barren chord plunges, much in the same manner the band did on its previous The Swan Road(2005). The Burzum influence is still ever-present, especially when those anguished guitars ring out by themselves, as if they’re the only ones braving a cold winter storm. “When the Gods Leave Their Emerald Halls” on the other hand, is blunt and forceful, going as far to find quick bursts of speed amidst the ramping pounding heard over the duration of the song

“Farewell to Autumn’s Sorrowful Birds” is as the title suggests, a bleak salvo that churns out grim riffs and keyboard passages effortlessly. Album closer “Night Woven of Snow, Winds, and Grey-Haired Star” (sheesh, that’s a grandiose title) takes a deep plunge into the band’s Scandinavian-inclined sound, doling out a hefty amount of brazen riffs and cold, calculated atmospheric bends.

Because of their unwillingness to do interviews and appear in bandphotographs

, there’s always a shroud of allure surrounding Drudkh. They certainly like to make things difficult on themselves in that regard and even more so with Eternal Turn of the Wheel, which should have been the logical extension of Handful of Stars. Yet such things are trivial when taking into account just how memorable and well-executed the album’s five songs

are…Drudkh can pretty much do as they please.