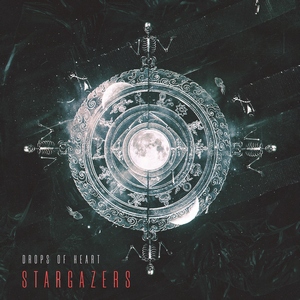 Melodic death metal from Russia and guest appearances from Richard Sjunnesson (The Unguided) and Bjorn Strid (Soilwork) – what’s not to love? Stargazers is Drops of Heart’s second full-length, and brings with it a listing of melodic death metal influences that covers the spectrum from the Gothenburg beginnings to more modern stuff. Unfortunately, a few things bog it down from not hitting its full potential.

Listening to Stargazers, you can instantly roll out the usual influences for this type of material (Soilwork, In Flames, Insomnium) and it’s immediately apparent that Drops of Heart have done their due diligence when it comes to making the sound work. They have a modern feel, yet the ‘commerical’ sounding aspects that usually come with it aren’t quite as predominant. Instead, there’s a more somber and reflective vibe that the songs take, instead of being overtly bouncy and happy – even with a somewhat strong synth presence. This is to the band’s benefit as they move ahead, since the occasional melancholy is a nice pairing with the more upbeat and thrashier energy that many of the tracks provide. “Coffin” is a fine example of this, with some floaty/dreamy atmospheric sections that trade off with heavier and throttling riffs with soaring melodies. That said, it’s not perfect, and there’s two minor drawbacks. The first is the overall length. At almost an hour, there’s too much music and not enough deviation away from the band’s formula. Which brings us to the second hurdle, the clean vocals. While they aren’t used excessively, and they have a more soothing feel than rocking, they aren’t quite as strong as the impactful growls/screams that make up the bulk of the material. “Frost Vice” is the first culprit of this, and the clean vocals sections almost take the wind out of the band’s sails – save for an immediate diving back into an energetic melody and hook.

Stargazers is an enjoyable release for fans of the genre, though the band’s finest hour is still in their future. With some tweaks to the formula and cleans, Drops of Heart could easily return with a standout offering.