Driving Force – All Aboard (Self-Released) 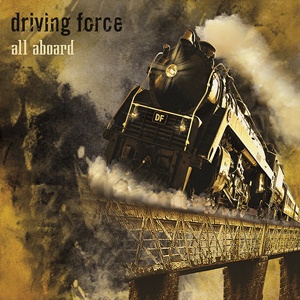 Switzerland has had a history of solid melodic hard rock/metal bands since the days of Krokus, Celtic Frost, Coroner, and Gotthard among others. Driving Force aim to stake their claim from this country – active since 2008 with an EP and two previous full-lengths under their belts. It’s been six years since that last release, but here we have their third album All Aboard – an eleven-song outing that straddles the parameters of classic 80’s metal and melodic hard rock.

The songwriting and performances come from a very basic, focused outlook – the main riffs very bluesy without containing many superlative embellishments, while the rhythm section stays in 4/4 pockets of groove, the choruses gang-oriented and equally simplistic for repetition’s sake. Predictable could be an adjective that comes to mind when tackling the mid-tempo Accept-ish march of “Black Beauty”, while the twin guitar harmonies galvanize the follow-up “The Battle” in an Ozzy meets Iron Maiden-like fashion. Introspective acoustic guitar action gives “Again” that dynamic emotional context an album like this needs – but the vocals of guitarist Thomas Mathis aren’t up to the same caliber for power, presence and proper syllable emphasis/pronunciation as the music, revealing one of the major weaknesses of Driving Force sustaining long-term appeal. It’s also hard to take a song title like “Sticky Shit Kid” seriously, with lyrics like ‘summertime – temperature is high/ what’s that noise – drip, drip, drip, drip’ matching to the riff rhythm. The band deliver some catchy music from time to time – the cultural / Iron Maiden bass/twin guitar shuffle throughout “Don’t Walk Away” where drummer Thomas Willareth delivers some nifty snare/fill combinations against his conventional duties probably the best of the bunch. Unfortunately, those moments are few and far between, as this record is plagued by subpart hooks and weak main vocals that one would expect from a much younger band learning the ropes – not someone with over a decade recording and writing material.

If calling the shots, Driving Force would be better off drilling deeper into their ideas and becoming very critical of what makes the grade. All Aboard has loads of 80’s classic influences at the helm, just not properly executed to that high standard necessary to earn a place in most ardent followers of this style.