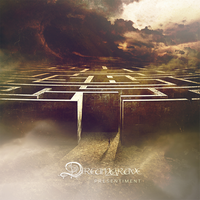 It’s always nice to get a pleasant surprise. Judging the artwork on Presentiment and then following it up with only listening to “Black Spiral,” this one was initially tagged as a Fleshgod Apocalypse-wannabe. The artwork has a similar design to FA’s Labyrinth and there were some similarities within the symphonic elements with heavy riffing, growls, as well as some female soprano vocals. But as the disc progressed, it became quite clear that Dreamgrave is very much doing something unique and more importantly, doing it well.

The songs on Presentiment will veer in directions from death metal to prog to gothic and doom with some jazz/classical influences as well. The band wisely avoids any classification truth be told. Every track takes on a life of its own. “Memento Mori” takes a notable jaunt with an organ bit that wouldn’t feel out of place on a Dream Theater album. “Presentiment Part II” opts for a dreamy Anathema-like vibe, complete with ethereal beauty. “False Sense of Security” uses some upbeat synths and has some Unexpect influences. “Presentiment” takes some Opethian dynamics and really nails the heavy/acoustic shifts. You get the point. Just as strong as the instrumentation is the vocal interplay between growler/singer Dömötör Gyimesi and female vocalist Mária Molnár. The two combine for some breathtaking moments.

It’s important to note that despite the large variety of influences and styles, never does Presentiment feel like a cut/paste effort. Dreamgrave have settled into an interesting and unique style quite early on, so it will be interesting to see where things progress from here. For now, Presentiment serves as an excellent introduction to the scene, and one that really needs to be heard to be accurately described. How’s that for a rarity?