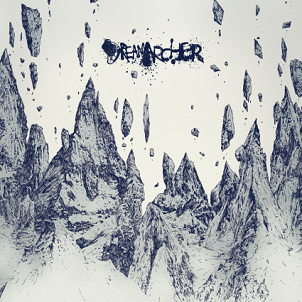 The premise of Norway’s Dreamarcher is to unite a bunch of jazz-educated musicians and have them play volume-driven, “loud” music without the burden of jazz’s complexity and free-form thinking. It reminds one of when progressive outfits like Rush or Fates Warning would openly laud the idea of playing “less is more,” because after all, “more is more” in technical frames. And yeah, there’s an inherent charm or primal function to laying down a simple, utterly bruising power chord after years spent playing elaborate music, but Dreamarcher haven’t quite figured out how to channel it on their self-titled debut.

Let’s be quick to note that Dreamarcher isn’t all primal riffage and doom lurking. (We’re starting to make them sound like Conan. The band from England, that is.) Citing a variety of influences from The Mars Volta to Deafheaven, back across to Converge and Mastodon, Dreamarcher offer a mélange of sounds, starting with doom drone on “Beat them Hollow,” the album’s undisputed best song. Guided by a haunting voice-over and sun-obscuring funeral riffs, “Beat them Hollow” rapidly dives into modern black metal territory, hence the Deafheaven nod. “Impending Doom” only complicates matters, showing up as a boppy indie rock cut, utterly devoid of the hard-metal leanings found on “Beat them Hollow.”

As such, the pattern repeats. “Burning the Remains” employs a sub-industrial timbre, while “Close Your Eyes” provides a scattered, jerky hardcore sprawl with average Joe indie rock vocals worked in. Closer “Shadows” is a cluster of noise experimentation and crashing drums, causing the appropriate ruckus, but bringing little else to the table. All it, and the rest of the album’s jams do, is give off the impression Dreamarcher picked one inspiration for each song, then ran it into the ground. Maybe they should have stuck to their jazz bearings…