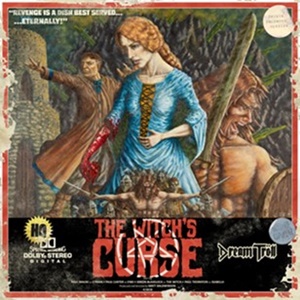 Sparse information exists when scouring the internet regarding this UK group. According to their own Facebook page, inspiration travels from the metal genre, and to all the metal clichés that they still love. Dream Tröll have released a full-length The Knight of Rebellion in 2017 and quickly resurface for a follow up EP, The Witch’s Curse – delivering three more epic songs that take on heavy/traditional riffs and AOR/classic rock elements that are throwback for inspiration, while not forsaking a bit of that modern punch and tonality to generate possible wider appeal.

The three songs are built around addictive and streamlined guitar riffs, Paul Carter and Matt Baldwinson filling the landscape seamlessly through a mixture of harmony and heavier licks and tricks. This becomes most evident on “The Battle for Enki’s Tower”, where there are numerous passages that the guitar often mirrors the vocal melody chose before building into a heavier, gallop-oriented section to open up those searing lead breaks. Lyrically spinning stories from the Old English/ Knights of the Round Table-period matches the NWOBHM-style music, even down to some of the special cowbell accents in the closer “Blood Moon”. Keyboards soothe in an atmospheric Rainbow meets Magnum way, or even add that 80’s Brit-pop aspect to certain proceedings while not overextending or washing out the metal style Dream Tröll clearly live for. You can feel that commanding aspect to ‘we will never be conquered’ during “Blood Moon” from latest vocalist Paul Walsh – his natural mid-range more in line with the smoothness of band such as Threshold or possibly Dave Grohl from the Foo Fighters, another differentiator to a typical screamer/shouter for the genre.

Add in a cover illustration that entices because of the Middle Ages tie in thematically, and it’s easy to understand that Dream Tröll certainly stand out from the traditional, classic metal pack. Their epic songwriting (averaging out at seven-minutes and change) makes sense given the story-telling aspect, but they make sure that all the musical parts are cohesive and going somewhere, not just meandering into a level of sameness or monotony. Solid stuff for sure – maybe not the most explosive in terms of out of the box hooks, but The Witch’s Curse has that long-term staying power through prolonged exposure.