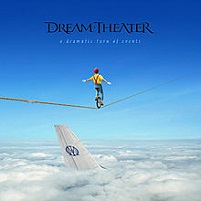 Without Mike Portnoy (for better or worse) steering the DreamTheater

ship, A Dramatic Turn of Events is the perfect opportunity for the emboldened progressive metallers to truly show

their mettle. No more chances to blame album failures on James LaBrie’s lack of involvement, or Portnoy’s overdone “Six Stages of Recovery” suite, or anything else for that matter…DT (and specifically, guitarist John Petrucci) had to deliver with this one. For the most part, they did.

chops with ease. As he should – dude only is a head teacher at the prestigious Berklee School of Music in Boston. He’s a bit behind everything in the mix, which is a change from Portnoy’s usually bombastic and in-your-face drums. Nevertheless, Mangini was the right choice and should serve the band well going forward. The rest of the band is still chomping at the bit to show off their chops, most notably keyboardist Jordan Rudess, who takes on a more dominant role than before.

No real surprises, as the band is still in step with its metal side, especially on lead single “On the Backs of Angels,” which rings oddly like “Pull Me Under” toward the front end. It’s nice to hear LaBrie find some open space during “Build Me Up, Break Me Down,” perhaps breaking free of the restraints from Portnoy (the two were never best of friends, obviously). Sans the lame-o ballad “This Is the Life” (chicks don’t dig DT), there’s enough to get the album past the breaking point, with the finger-flying-good solo section of “Lost Not Forgotten” emerging as the album’s high point.

A Dramatic Turn of Events isn’t the creative statement it could have been, rather, it finds Dream Theater staying within their comfort zone, probably because they don’t know any better at this point. The fact that the album doesn’t fall on its face could be considered an achievement onto itself. However, this hardly “sticks” it to Portnoy. In fact, it feels like just another Dream Theater album.