The second Primordial spin-off in the last six months (the other being Twilight of the Gods’ fantastic debut album), Dread Sovereign’s All Hell’s Martyrs debut is the product of vocalist A. Nemtheanga’s need to get some riffs off his chest and explore the abyssal terrain of doom. His signature howl remains largely in check (and rightfully so), yet Dread Sovereign has a far more oppressive feel than both Primordial and Twilight of the Gods. That’s why people do side-projects: To not make music that sounds like the main breadwinner. (Duh.)

Nemtheagna (who also handles bass) is joined by guitarist Bones and Primordial drummer Dubh Sol, thus solidifying a raw, spacious U.K. doom sound, which is upheld rather evidently on opener “Thirteen Clergy,” which sees the vocalist evoke the ghost of Ozzy circa 1970. Total homage, but respectfully done. The man gets his trademark vocal spears in, of course, like on “Pray to the Devil in Man,” which is the album’s most behind-the-beat song, and Nemtheanga doesn’t disappoint with a plethora of styles and enunciations. And even though the lollygagging, uninteresting crawl of “We Wield the Spear of Longinus” is absent of dynamics, the primary songs of worth include “Cthulu Opiate Haze,” and “Scourging Iron,” a pair that is fitting of ominous, near-gloomy doom sphere in which Dread Sovereign establishes itself.

With virtually anything bearing Nemtheanga’s name being something of immense value (and no, we’re not fanboys of the Irishmen, just quite fond of his other two bands), Dread Sovereign has the depth to engage the doom crowd, who should find value in the various vocal fluctuations, dark, foreboding riffs, and song structures without limit. All in a day’s work for an Irishmen, eh? 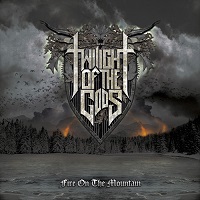