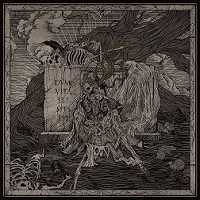 A hereby unknown Finnish epic black metal entity, Draugnim have quietly kicked around the always-fertile Finnish metal underground since 1999 in varying stints. As such, Vulturine happens to be the band’s first album in six years, and by all accounts, should heavily bump the band from kvlt, to well-known status. (That is, if all is right and just in the world.) Obviously, Vulturine is serious business.

Operating largely under the pagan black metal banner, the six songs found here are flush with melody. Part-Moonsorrow, Windir, and Primordial, Draugnim is never at a loss for a sweeping melody section, like the ones found on album highlight, “As in Hunger, So in Demise,” where an endless cascade of glorious guitar lines come raining down from the sky. The necessary BM ramp-up is found on “A Passage in Fire,” where Mr. Raatikainen fires off standard-rank blast drumming in what emerges as the album’s most firebrand number, of course. The band’s atmospheric plunges are on point, too. “Grief Unsung” and “Serpent Stone” both equalize the pace, laying down gentle keyboard touches and Viking backing vocals.

A term that gets thrown around with a bit too much abandon, “epic” is certainly apropos when dealing with Vulturine. The album is one climax after the next, all set to the tune of adventurous, explorative jaunts that aim for the heart of cold, blustery Finnish black metal. Above it all else, it’s a more focused, realized version of the above-mentioned Moonsorrow’s last few efforts, and frankly, surpasses them in all ways, shapes, and forms. Get this.