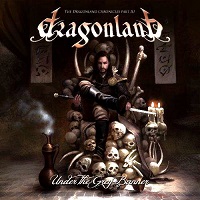 A long time coming to most fans of this Swedish symphonic power metal band, Under the Grey Banner appears five years after Dragonland’s fourth release Astronomy. It’s not like guitarist Olof Morck remains comfortable in a rocking chair – he also records and tours with Nightrage, Amaranthe and Disarmonia Mundi. This album actually concludes The Dragonland Chroniclestrilogy that the sextet began with their first two records in 2001-2002, and the band spare no expense

in terms of sonically fulfilling the storyline through these 12 tracks.

The power, bombast and theatrical nature bursts upon the listener with tracks like “Shadow of the Mithril Mountains” and “Fire and Brimstone,” with journeyman drummer Morten Lowe Sorensen delivering some subtle cymbal-snare-double bass tempo dynamics especially in the latter number. Some of the transitional moments are close to Broadway-style in the melodies and arrangements, especially the shorter “Throne of Bones” which segues amazingly into the mid-tempo, 8-minute title cut that fits well into the Blind Guardian-meets-Kamelot mold. Main vocalist Jonas Heidgert flexes all of his softer melodic moments during the verses, building to a heavier, almost symphonic dualism between keyboardist Elias Holmlid and the death guest vocals from Amaranthe’s Andy Solvestrom through the mid-section and conclusion.

interplay between Morck and Jesse Lindskog hasn’t lost any sense of clarity in their sharpness – the main riffs in “A Thousand Towers White” balance out your conventional power bounce with an attacking gallop that appears to be a Dragonland trademark over the past few years. The main challenge I foresee will be translating all of the extra voices and layers onto the stage, but rest assured the group still have their hearts in metal and even incorporate some of their death side band aspects into the fold.

While some in this genre have gone more straightforward such as Kamelot or possibly too symphonic like Rhapsody (Of Fire), Under the Grey Banner pushes all the right power metal buttons and should be an instant winner for most.