Dragonforce – The Power Within (Roadrunner Records) 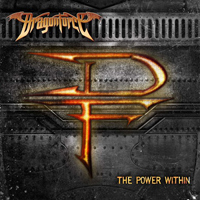 Dogged by their reputation as “Studioforce,” extreme power metallers Dragonforce have regrouped with new singer Marc Hudson, coinciding with a newfound “less is hopefully more” approach. The Power Within effectively brings the multi-national band into the power metal pack, with less showmanship and alas, some actual thought into their compositions. Granted, no one is ever going to take these guys seriously, but at least The Power Within isn’t the wank-fest it could have been.

Hudson is hardly a deciding factor, for he’s given pretty much the same vocal lines that previous singer ZP Theart sung. In fact, the less informed would have a difficult time separating the two, especially on speedy joyrides like “The Heart of the Storm” and “Fallen World.” On the softer “Seasons,” he’s at his best, coming across like a seasoned power metal vocalist; you know, the type that is able to work a crowd, sing about banal things like glory and honor, all the while staying pitch-perfect. Hudson is pretty much going to be that guy for the rest of the career.

To their credit, one can instantly identify a Dragonforce song, most notably on the opening runs on “Wings of Liberty,” which is set up nicely by a tender Hudson moment. The aforementioned “Fallen World” is supposed to the band’s fastest track to date and since Blistering hasn’t exactly kept score on DForce’s BPM count, we’ll take the band’s word for it. Nevertheless, lead single “Cry Thunder” is a pure-bred power metal single, while album standout “Die By the Sword” (nice swipe of a Slayer title, gang) is upbeat and rousing.

Now that the sheen of the Guitar Hero video game era has worn off, Dragonforce is faced with the extremely difficult task of proving they’re more than just a fly-by-night goofball parade. On The Power Within, the band demonstrates they have some actual depth, and had this album hit earlier in their career, Dragonforce might be more than just a running joke in underground circles.