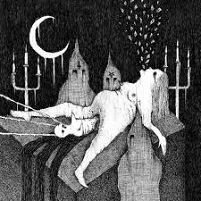 Good name for a vampire metal band, eh? “Dragged Into Sunlight.” Beats the piss out of Vampires Everywhere!, who now have forever ruined the film The Lost Boys for yours truly. Rest in peace, Corey Haim. Anyway, Hatred For Mankind was initially released in 2009, but is given the reissue treatment via Prosthetic, making them quite the odd-man out on a label now predicated on modern death and thrash metal.

Enjoying a mixture of crusty grind and the now well-overdone sludge doom sound, these UK metallers don’t mess around when it comes to atmosphere, as this thing is bleak as bleak can be. Production is right out of the Earache Records vault circa 1992, complete with the ragged guitar tone and buried drum sound, all the while singer T (he of just one letter) burps and bellows his way when needed.

Hatred For Mankind is ultimately crippled by its unwillingness to deviate from one song to the next. Sure, the surplus of feedback kicked up during “Buried With Leeches” would make Eyehategod proud, and the sparse melodic bits that pop up on “I, Aurora” are totally welcome, but Dragged Into Sunlight waste too much time revelling in the sonic mess they created. Plus, some of these songs are a little too long in the tooth, specifically “Volcanic Birth” and “Lashed To the Grinder and Stoned.”

As opposed to scaling things back, Dragged Into Sunlight leave a little too much of themselves out there on Hatred For Mankind. Sure, this stuff is a grizzly and furrowed as the next grind-crust-doom-sludge band, but it becomes less imposing and more annoying during repeated listens. Plus, the album title? SO not intimidating, dudes.