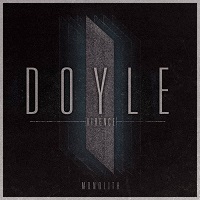 Recently having to change their moniker from the simple, flat-footed and Misfits-derived “Doyle” to the broader Doyle Airence, these French post-metallers sure know how to kick off an album cycle. Hopefully the good men at Lifeforce didn’t manufacture the CDs with just the Doyle name on it…talk about a waste of money in these tight times, eh? No matter, for the re-branded outfit has already experienced some level of success in their homeland thanks to 2010’s And Gods Will…, which led to some slick opening gigs with Between the Buried and Me, as well as the Deftones. Monolith is the follow-up, and the first for the above-mentioned Lifeforce.

Stylistically, there’s an ample of amount of post-metal resonance. You know, the calm patters of melody, laid-back drums, and space. But the modern hardcore element of Doyle Airence is the proverbial fly in the ointment, sometimes getting a jolt (“Friendly Fire”), while other times it’s a smidge misguided, like on the bouncy “Stonefields.” In fact, most of the running order of Monolith screams “post” to limitless effect, meaning that those stray guitar chords, heavy crash cymbals, and effects are going to get a workout, so cast aside those metallic expectations.

Perhaps the song “We Were Kids” sums it all best, as singer Thomas V claws his way into some partially whiny-cleans, thus sending the song into a sputter as the bottom drops out and all one can hear is Mr. V shouting aimlessly in the back. Monolith is far from being refined and certainly not a mature post-anything body of work. Those darn kids.