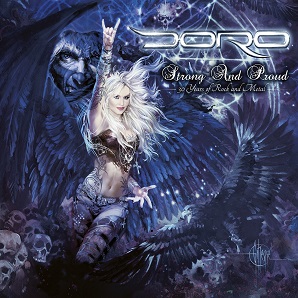 Not to be confused with her 25 Years in Rock… and Still Going Strong, or 20 Years – A Warrior Soul sets, Strong and Proud: 30 Years of Rock and Metal is yet another live outing from German metal queen Doro Pesch. Doro’s longevity and consistency are a marvel, even though she’s now long past the stage where there’s genuine interest in new material. But, she’s great at rounding up her metal friends for renditions of her classic solo and Warlock songs, of which there are many.

Fourteen cuts in all comprise the CD set (there is a 3-DVD set which is probably far more enticing), with a run of Doro’s solo jams (“On the Run,” “Save My Soul” and “Raise Your First”) starting off the proceedings. (Note: the DVD version finds these songs further down in the running order.) Former Iron Maiden vocalist Blaze Bayley provides guest vocals on Maiden’s “Fear of the Dark,” a song Doro has been covering for eons. Bayley hangs on for dear life while Doro has no problem; same with the accompanying orchestra. Blind Guardian’s Hansi Kürsch provides the set’s best guest spot on “Rock Till Death,” while former Accept throat Udo Dirkschneider joins in on the band’s “Balls to the Wall.” And, of course, Warlock’s enduring “All We Are” closes the set on the CD version.

Sort of an arbitrary release, Strong and Proud: 30 Years of Rock and Metal (the CD version) probably could have been left in the vaults. Live albums serve little if no purpose at the present time, but Doro has done enough for the scene to warrant a free pass with this one. Looking forward to 35 Years of Metal and Rock: Still Stronger and Prouder. (Something like that.)