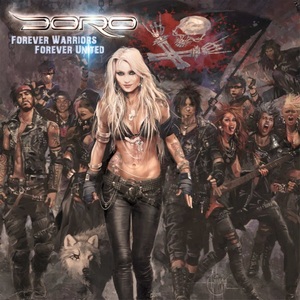 Ever a persistent force in the metal world, Doro has been metal’s queen for over three decades. A title that she has more than lived up to with quality releases over the years, even if there is still a strong reverence for the Warlock era. This time six years have passed since her last studio album, but Doro has returned with a vengeance. Forever Warriors Forever United is her first double-album, and it lives up to the expectations set in front of it.

With two different albums, it’s worth looking at them individually as well. Forever Warriors is the heavier of the two discs, with many of the anthems that Doro is known for coming out as soon as the play button hits. The clearly destined for live sets “All for Metal” leads off and features a plethora of top-shelf talent lending a hand throughout. But “Bastardos” keeps the energy moving, with some excellent chops and classic riffing and some massive hooks throughout. The duet with Johan Hegg, “If I Can’t Have You, No One Will” will probably polarize some due to the growled vocals but the song still finds a way to stick in your head regardless. The album’s first ballad-y, “Soldier of Metal” finally slows things down and serves as one of the disc’s strongest moments. The remainder of the disc follows suit with some more energetic cuts that have a classic Doro vibe to them (along with the slower “Love’s Gone to Hell”). Many fans would probably be thrilled with just this single disc by the time it comes to a conclusion.

The second disc, Forever United, feels a bit more melodic and emotional than the first disc. “Resistance” is a solid enough opener, but the sweet “Lift Me Up” is bound garner the accolades with its touching sentiment. Other melodic songs like “It Cuts So Deep,” “Living Life to the Fullest,” and “1000 Years” continue this trend, but some more rollicking tracks like “Heartbroken” and “Fight Through the Fire” bring some balance, maintaining the strength of the first disc. Truth be told, it’s tough to decide if one disc is stronger than the other, with the different energy that comes from each – it’s more that they are both meant to be enjoyed in their own way.

A strong double-album effort that doesn’t lose its momentum along the way, Forever Warriors Forever United should be just the fix that Doro fans have been craving. While she could ride the coattails of her successes, this release shows that she’s just as passionate and energized as ever and just as relevant. May she continue her reign for years to come.